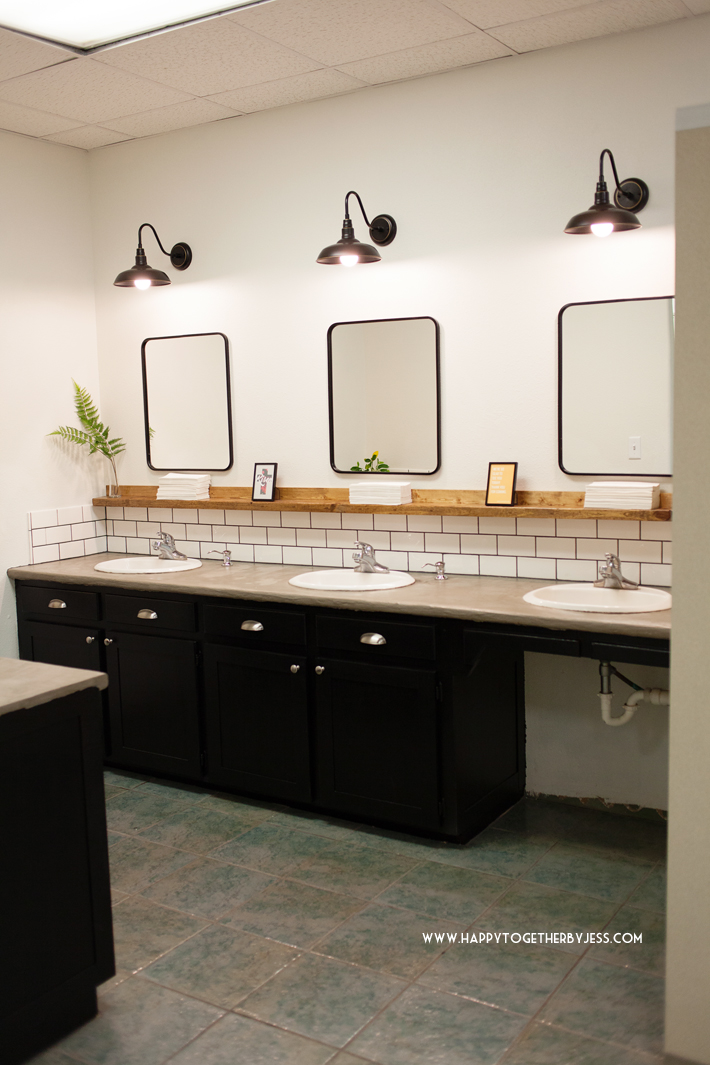 A few months ago I shared about an almost finished bathroom remodel that I worked on in four bathrooms at our church.  It was such a great budget friendly remodel and one of the cost saving parts was doing a faux concrete countertop to cover up the laminate that was there. This brought cohesion to the whole bathroom style and I was able to do a women’s and men’s bathroom for under $40. I learned a lot and wanted to share my experience for anyone else researching to determine if this is something they are interested in completing. I know I researched a ton and the more diy testimonials and tutorials there are the better. Some of the online tutorials and info posts I looked at were these:

A Beautiful Mess: Concrete Countertop DIY and Concrete Feather Finish Countertop (their first post was my biggest inspiration because that one had curved edges like the one I was working on! They look like they did a much better job than I did though hahahaha). 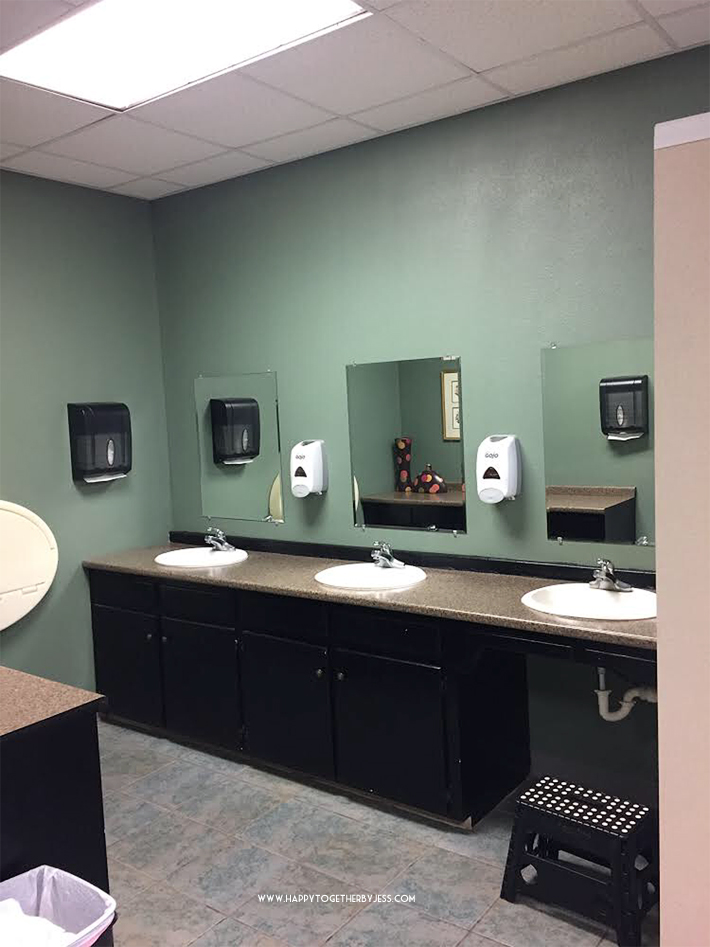 First off, let me begin sharing about these countertops. They are laminate but have a curved front edge. Many of the tutorials online appear to have all straight edges. Now some of the sides were straight and I have to say that this process works best on straight edges. I sanded the laminate some to help with adhesion, but it was still a battle to create a quality look and thickness on those curved edges. So, if yours are curved, be aware of this. You will want to take some extra time on the curves and I ended up just using my hands (which had a fitted latex glove on to protect my hand) to apply it there. The straight edge tools people suggest using just didn’t work very well for those spots for me.

Secondly, since these are countertops in a bathroom, I was not worried about making it food safe since no food should be in the bathroom hahaha. That made the process even less expensive and faster to accomplish.  So I would recommend this type of diy project very quickly for a non food space and be more hesitant to for a kitchen type space. The products I ended up using were all from Lowe’s: TEC Skill Set Indoor Skimcoat and Floor Patch and Quikrete Cure and Seal (which, again, I used since this wasn’t a food surface). 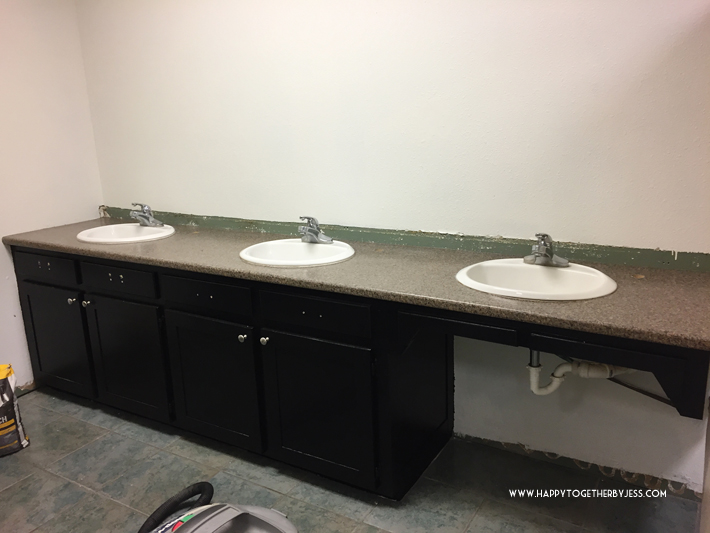 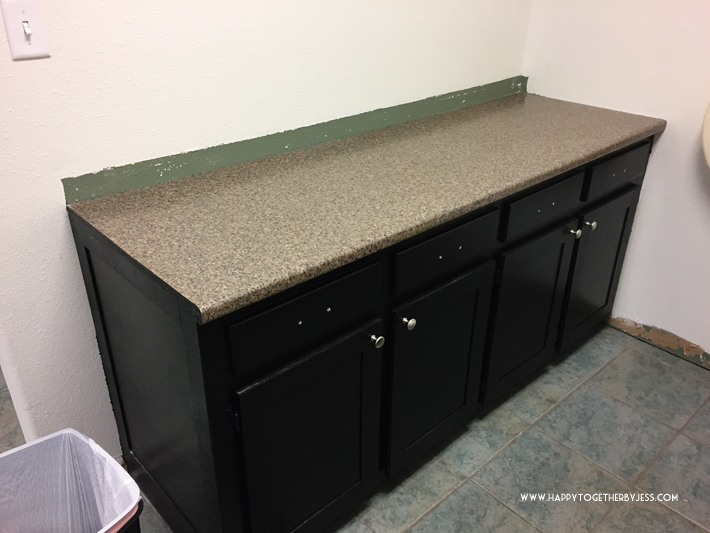 I first began by sanding the countertops to help create a surface that the skim coat will adhere to nicely. I just sanded by hand for this versus using a sander. Then I cleaned and taped up some paper to protect the cabinets. 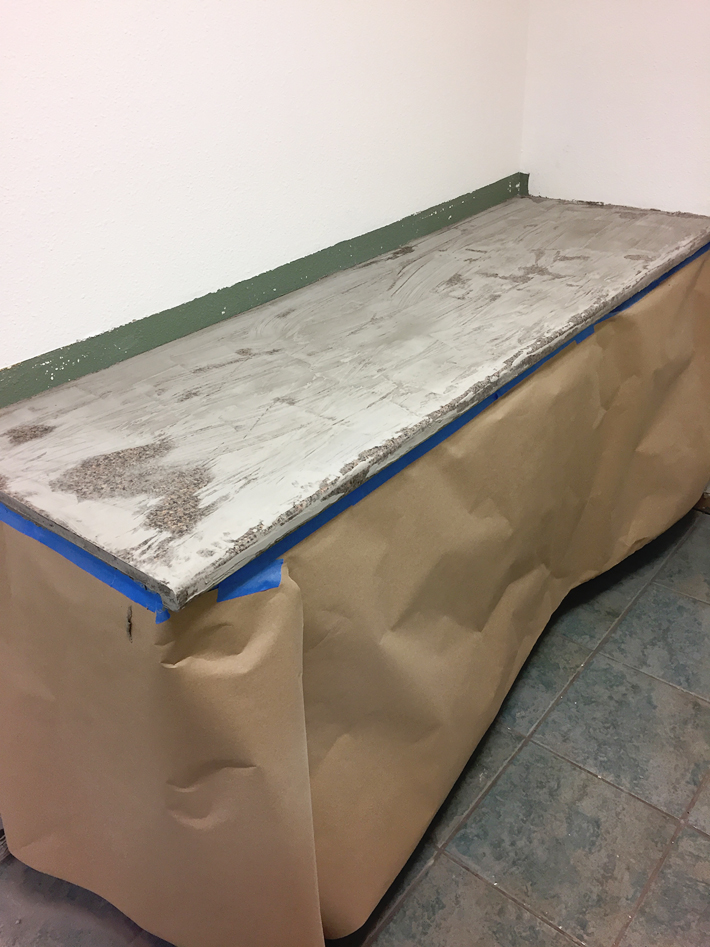 I mixed up a small amount of skim coat at a time until it was the consistency of peanut butter as I had read. After doing this a lot, I found that I liked it actually a little wetter than that consistency. It made it easier to apply and still dried very well and rock hard. The skim coat dries on the fast side, so that is why smaller batches is a good idea. The first coat was the hardest to do for me. It was very rough and didn’t fully cover which I expected from the other posts I read. I saw how many people would use their sander at this point and in between each coat to smooth it down, so I did that at this point. I totally regret doing that! The dust it created was unreal. Covered everything. Even created a layer of dust on the walls that I had to wash off. What I discovered is that I preferred to lightly sand in between each coat to get any “sharper” spot smooth, but the next layer I applied would fill in the crevices and such well, smoothing it out on its own. I also used a flat metal and plastic scraper to see which one I liked best. They were both okay, but it was good to have a larger and then smaller one to go around the edges of the sink and close to the walls. Another thing, which I mentioned earlier, was that I also really liked the result of using my (gloved) hand to spread on the skim coat for the layers after the first one. I could feel the surface and level out some spots nicely and it was easier doing that on the rounded edges. If you use gloves, make sure you have a few pairs as you will need new ones for each coat. 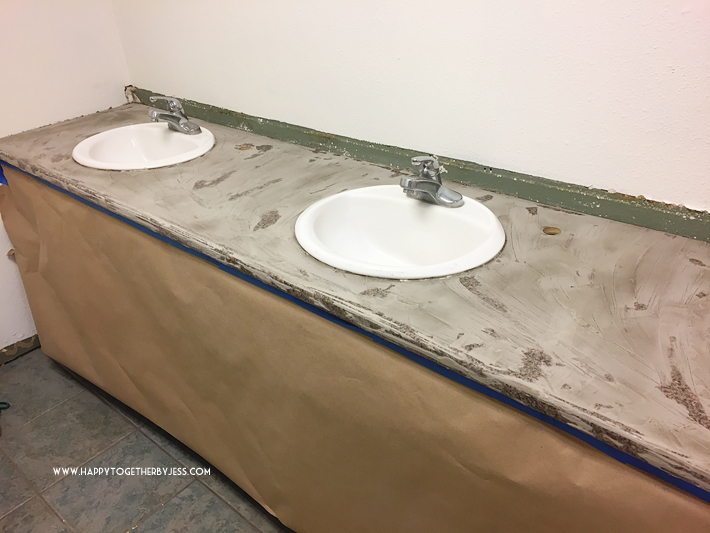 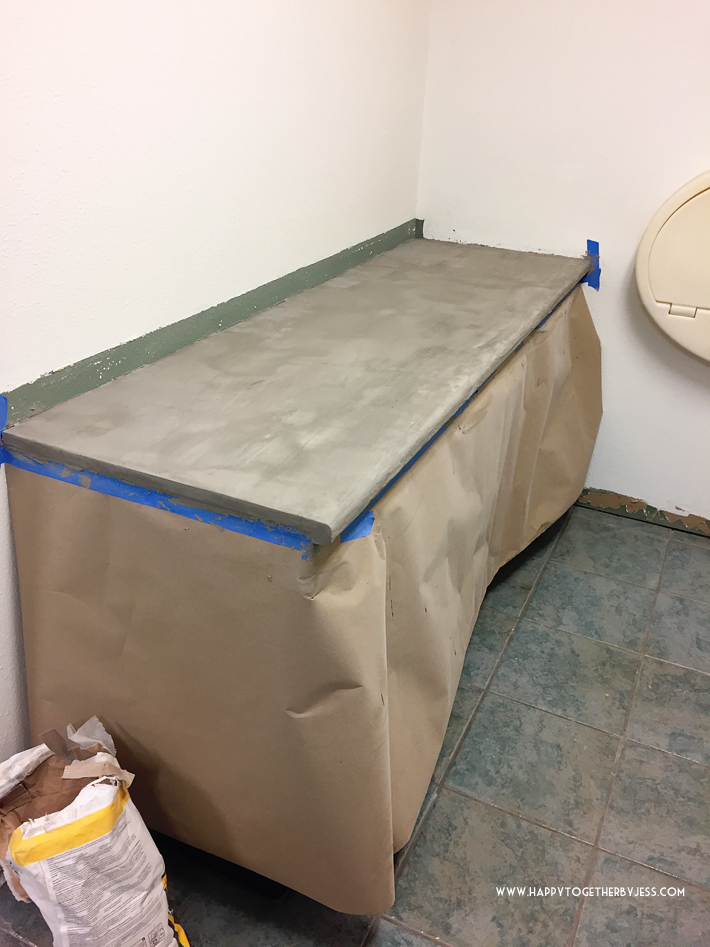 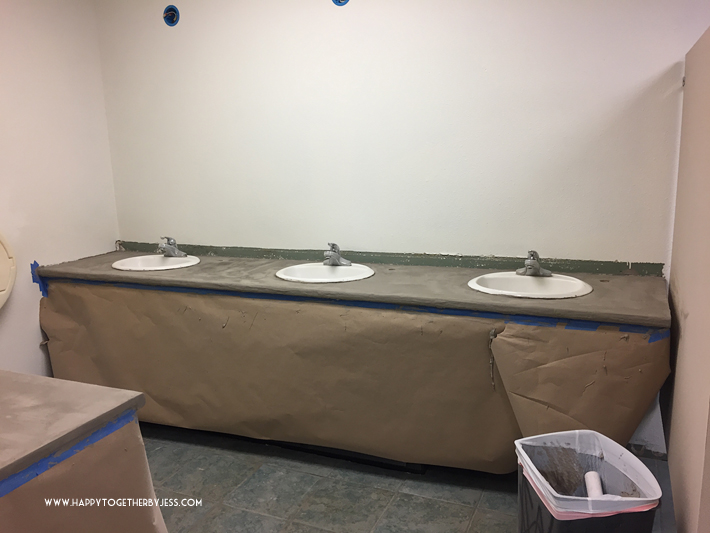 All in all, I did three coats on each countertop. I will be honest though, I probably could have done one more coat on the rounded edges. But, I was out of skim coat and didn’t want to buy a huge bag just to do that. Plus it still looked great anyways! After it was really really dry, I did two layers of the concrete sealer. It changed the color only slightly. The first layer didn’t make a big difference, but the second coat gave it more of a sheen (which I thought looked really nice). After the bathrooms began to be heavily used again, the water and soap did create darker spots. I thought it looked really awesome and added character, although others might not like that. The sealer seemed to be good, but I suggested that they later add a layer of polycrylic for even better protection and waterproofness. Or at least another layer of this sealer.  I had read some others who had used polycrylic and had great results. Even though I didn’t technically use it yet on skim coat, I have used it on so many other materials (wood, paint, ceramic, etc) that I do not doubt its abilities to do a good job in this circumstance. 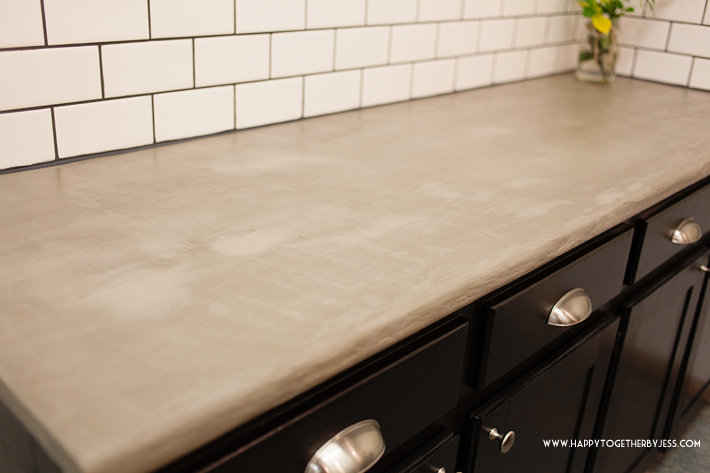 All in all, such an easy (but slightly time consuming since you have to wait on drying times after every layer of skim coat and sealer you do) and cost effective way to update countertops. Maybe one day I will end up doing it again. 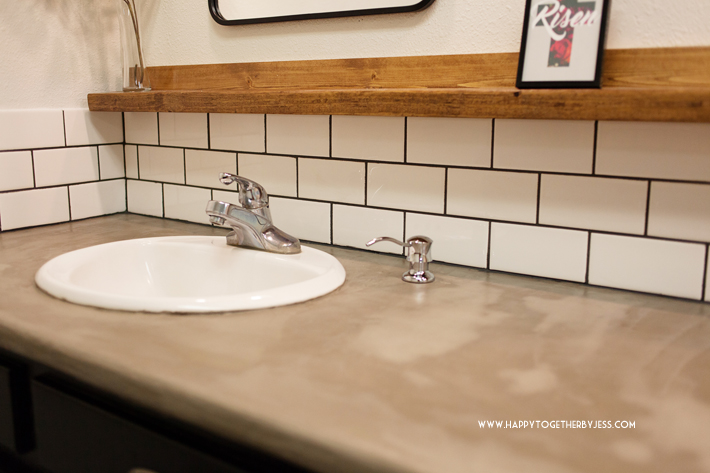