There’s a little myth (or maybe not such a myth) that is said about those who have babies while in flight school (my hubby is training for the Coast Guard). It’s that you will have a girl. Some say this happens because of the stress. Some say it’s because the way the plane has you sitting near things, it kills the little boy sperms. Well, whatever it is, I haven’t met a person here that is in flight school who had a baby boy. It’s been all girls. So, another Coastie family that we are friends with down the street just had themselves a little girl. I made the  baby and the big sis a set of dresses using the Let Freedom Ring Tutorial. I also made two little rosette hair clips. Some of you have made your own Let Freedom Ring dresses lately as well. Here are a few that people shared in the Flickr group or emailed me: 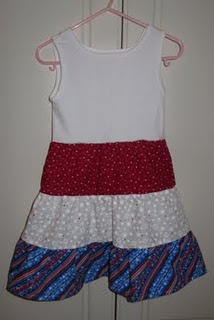 via Keeper of Thy Home